Last night, we almost reached Thunder Bay but had to stop, because… There actually was thunder. It started to rain showers of kind and polite Canadian water but we found a small rest area that seemed safe, just in time before nature could get us washed clean (though a nice shower wouldn’t have caused any harm). If I listened carefully, I could hear the droplets of rain say sorry every time they hit my window. We fell asleep with flashes of lightning every 30 seconds, literally.

It was our first rain since we started the road trip 7 days ago. We slept better since the air was fresher and when I got out of the car, I just then saw that we had stopped next to a grey lake full of fog. My eyes were happy. 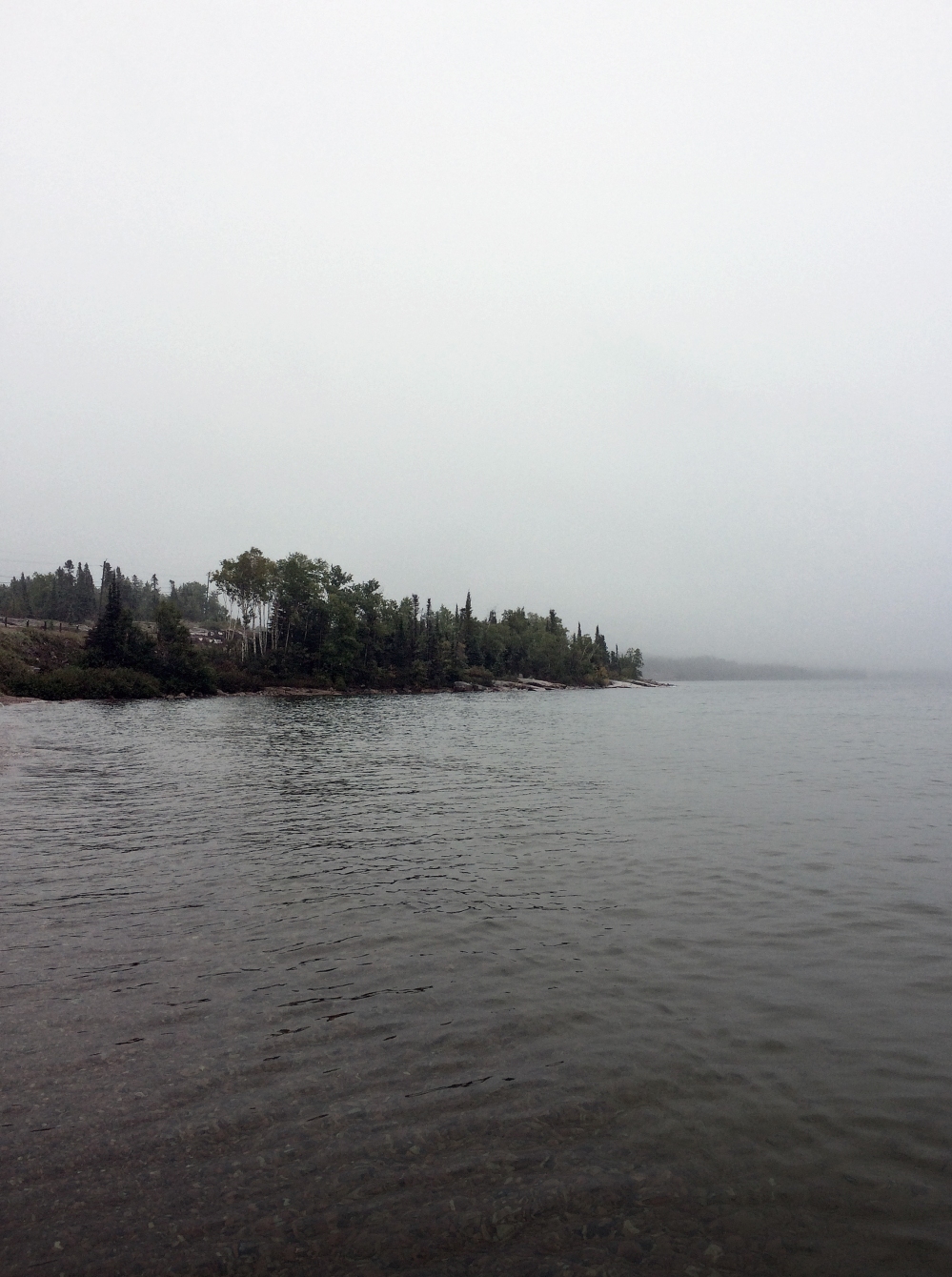 A road employee stopped by to empty some garbage cans. He had a big round belly and was also wearing a moustache. It seems like a trend here on the road. He asked us where we were coming from and what destination we were heading to. Knowing that we had a long way ahead, he happily suggested: “There is a stop in about 60km! At Nipigon!” We had just stopped so we didn’t understand why we would need to stop again in 60km, that was only about 1 hour away. So he added: “There is a Tim Hortons there!”

We had to laugh. And we did. And we thanked him for the thoughtful suggestion. Only true Canadians see Tim Hortons as an important stop during a trip. The coffee felt good. And no cashier said Okie-Dokie!

We just crossed 90 degrees longitude West and entered Central Standard Time Zone! Which means we win one hour. I feel like Marty McFly.

We finally made it. We are now in Manitoba! The price of gas here is 0,94$ for a litre. I didn’t see this since I was about 11 years old.

Our thoughts about Ontario: it is huge. Huuuuge as the orange man would say it. It took us a very long time to cross that province. We didn’t see much of it because we mostly drove on the Trans-Canada highway but the road was full of tasty candy for the eyes.

Also, you know, travelling with a cat is wonderful and full of surprises. Good ones and bad ones. Bea started having existential crises when it becomes pitch black outside and the car is rolling. Yesterday, she wouldn’t stop meowing and kept doing so while stepping everywhere in the car to the point where she spread (clean) litter everywhere. She did that for about one hour even though we walked her. I believe that during the process of her drama, she lost 3 of her cat lives. Crisis, die, come back to life to annoy, die again, resurrect to annoy some more, etc. So she has 6 lives left. We didn’t know the particular explanation of her behaviour. But as soon as we stopped the car and went to sleep because of the thunder, she suddenly stopped. We figured there were some moments when late at night, she either wants out or wants peace, which is totally understandable, but not always realizable when you need to go from point A to point B. So, as she did that just 20 minutes ago while we were driving, I held her carefully by her harness and slowly opened my window since she was basically doing the bacon on the glass and tearing her vocal chords. She popped her head out, got blasted by the wind and the cold, and she is now sleeping peacefully like an angel.

Later, we took a real shower at a youth recreational centre for 4,25$ each. It felt like Christmas morning. Do not take showers for granted.

It is night time and we are now heading to Winnipeg. We’ll stop there to sleep in the car at Walmart. We found out they let campers do that in almost every Walmart in Canada, as long as they don’t park directly in front of the entrance.

View all posts by mpresspause